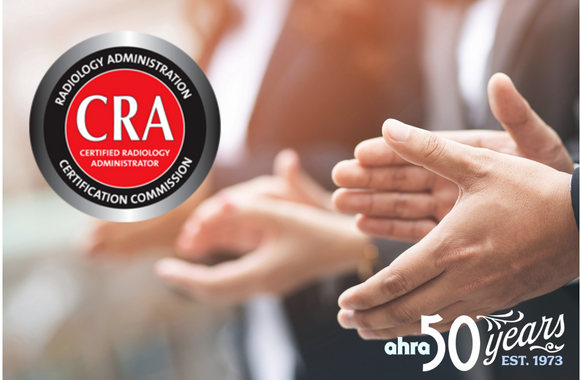 The Radiology Administration Certification Commission (RACC) is pleased to announce the results of the recent commissioner elections.

Dawn McNeil, CRA is the Program Coordinator Radiologic Technology at Rasmussen University in Ocala, FL.  She has been a CRA since 2006.

Tricia Trammell, CRA, RT (R, M, QM, BS) is the Imaging Operations Manager, Moncrief & Las Colinas of UT Southwestern Medical Center in Fort Worth, TX.  She has been a CRA since 2011.

The 2023 commissioners of the Radiology Administration Certification Commission (RACC) elected the following officers  to lead the commission for 2023.

Many thanks to Sandra, Kim, and Tricia for their willingness to serve the 2023 RACC and the CRA program in this capacity.

Congratulations are extended to the Fall 2022 class of Certified Radiology Administrators (CRAs)!

There are currently 1,064 CRAs and CRA-Retired. Forty-nine individuals received a passing score on the computer-based exam to become CRAs. These individuals may be recognized by the credential CRA after their names. Bravo all!

The CRA exam tests specific knowledge and skills necessary to lead an imaging team and manage the wide range of tasks involved in imaging management throughout a range of practice settings. For more information about the CRA credential, please visit  http://www.CRAinfo.org.